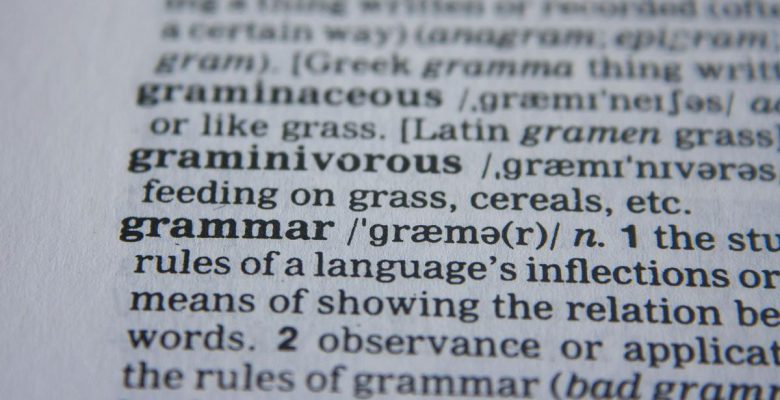 We’re all entitled to our grammatical preferences – but grammar itself does not care about them one bit.

People get corrected on their language all the time. With written language, this is mostly about spelling and punctuation. In some cases, though – especially when speaking – we’re pulled up on our grammar. Whatever you think about “grammar Nazis”, there are some times when they are just plain wrong. Here are five examples of grammar you may have been pulled up on which really make no sense at all, grammatically speaking.

How many accidents have been caused by overzealous teachers correcting their students’ language when they innocently ask: “Can I go to the toilet, please?” “You mean ‘May I go to the toilet?’” was the stock response whenever I asked – and it confused me because I, like everyone else, including the teacher, knew that “can” has two different meanings, depending on context.

Yes, it can describe what you are able to do – the “dynamic meaning” in linguistic terminology – but it can also dictate what is permitted. In fact, those same teachers would also say: “You can take your pencil cases out now” – using the permissive, or deontic, meaning.

The ability reading of “can” is older, but the oldest OED example of the permissive reading is from 1489, so the idea that “can” is only descriptive makes no sense. “Can I go to the toilet” is simply ambiguous. It can either describe your ability to – well, you get the idea – or it can mean: “Do I have your permission to go to the toilet?”

In fact, the word “may” is ambiguous in a similar way in statements, but not questions. Compare “You may come in now” with “It may rain later, judging by those clouds.” So in short, when asking permission you may use “may”, but you can also use “can”.

How many times have you been corrected for saying “I am good, thanks” in answer to the question “How are you?” This is another kind of correction which makes no sense. The verb “be” – forms of am, are, is, was, were – is what linguists call a “copular verb”, ie, ascribing a property to a subject.ADVERTISEMENT

This verb can be followed by an adjective. Think: “It is cold”, “I am tired”. “I am good” is no different.

So what are people objecting to here? There is another adjective “well” which can also be used to describe well-being and, until recently, was used rather than good for this purpose.

This adjective developed from the adverb “well” in Old English. Often when people correct “I am good” they claim that we need an adverb here. In fact, the opposite is true – “be” needs to be followed by an adjective and “well” only works because it can be either an adverb or an adjective.

So the moral of the story is that all’s fine with both well and good. “I am well” is older, but “I am good” is first recorded in 1921, so only people over the age of 99 can claim it to be a recent abomination.

This is something that gets corrected again and again – and it makes little sense, because many people say “you and me” or “me and you” whenever they join these two little words together, in a coordination.

What makes no sense is when people are corrected for using “you and me” in object position or after a preposition such as “for”. People say “for you and I”, because they want to avoid saying “for you and me”, but we wouldn’t say “for I” would we? This “hypercorrection” shows us that the distinction between subject/non-subject is breaking down in this context.

“Whomever wants to help – can”, says Walter White in Breaking Bad. In fact, White says “whom” a lot. I guess this is because he is an, admittedly somewhat corrupted, high school chemistry teacher and using “whom” marks him out as an educated person. But what is “whom”?

Once upon a time, English was a language with rich grammatical case like Latin, German, Russian or Polish – a means of encoding whether a noun phrase is being used as a subject, object, indirect object etc.

We still have it to some extent in our pronoun system, as discussed in the previous point, and we used to make a subject/non-subject distinction with who/whom too. Nowadays, most English speakers no longer make this distinction, and many people who use “whom” use it because of hypercorrection in contexts where it would not have been used historically, like Walter White does.

The passive is to be avoided at all costs. To be honest, this was not really advice that I received at school but it is something I have been told – Oops. That people have told me – at many training sessions about good writing in my adult life.

This myth has already been debunked online, notably Language Log – but it is so commonly cited that it needs to be mentioned here. The passive is just a way of making the undergoer of an active sentence into a subject, and we use it, especially, when we don’t want to say who the instigator of something was.

When I wrote “I have been told” above, I did so precisely because I didn’t want to specify exactly who had done the telling. The passive allows me to do this. Now, in some cases, we need to know who did something. The passive allows us to include this information too “I have been told by some people”. In fact, because this information is optional, a case could be made that including it actually creates emphasis.

This article was adapted from scroll.in