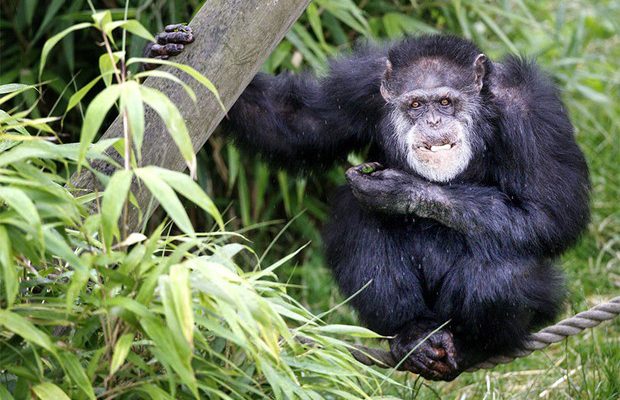 Lip smacks made by chimpanzees follow a rhythm similar to human speech, according to a new study.

Monkeys are known to use this facial gesture, characterised by fast-paced cycles of vertical jaw movement, to communicate with each other. But scientists have, for the first time, observed these mouth signals in a great ape and found their lip smacks to have the same pace of human spoken language.

They believe their findings, published in the journal Biology Letters, could be a “critical step” towards unlocking the mystery of how speech evolved in humans.

Humans are thought to open their mouths between two and seven times per second while talking, with each open-close cycle corresponding to a syllable.

This speech-like rhythm has also been observed in other primate species such as gibbons, orangutans and macaques. However, the lip smacks of African great apes, the closest species to humans, had never been studied.

They analysed the video recordings of these primates from Edinburgh Zoo and Leipzig Zoo in Germany, alongside footage collected from wild communities in Uganda, including the Kanyawara and the Waibira. Researchers found that chimpanzees made lip smacks while grooming another, opening and closing their mouths at an average of four times per second.

According to the experts, these findings confirm that human speech has “ancient roots within primate communication”. They believe these mouth signals may have played a role in the evolution of a vocal system in humans that laid the foundation for speech.

Study author Dr Adriano Lameira, from the department of psychology at the University of Warwick, said: “Our results prove that spoken language was pulled together within our ancestral lineage using ‘ingredients’ that were already available and in use by other primates and hominids.

“This dispels much of the scientific enigma that language evolution has represented so far.”

He added: “We found pronounced differences in rhythm between chimpanzee populations, suggesting that these are not the automatic and stereotypical signals so often attributed to our ape cousins.

“Instead, just like in humans, we should start seriously considering that individual differences, social conventions and environmental factors may play a role in how chimpanzees engage ‘in conversation’ with one another.”

This article was republished from sciencefocus.com

Previous ArticleThis is the PERFECT resume: Employment coach reveals the 10 steps you need to follow to secure an interview for the job of your dreams
Next ArticleThe English Language Schwa Vowel Explained