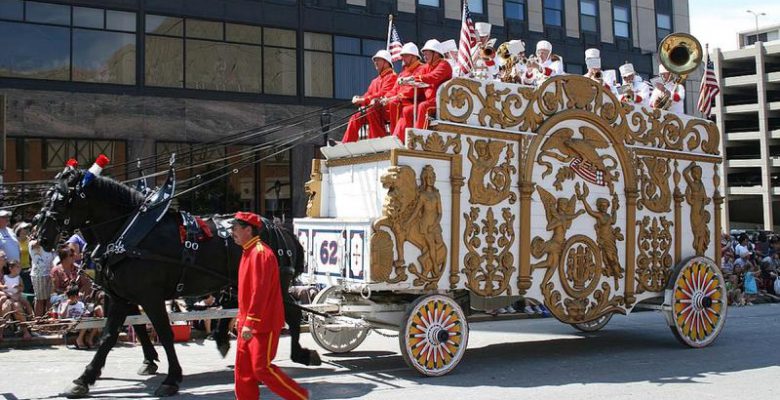 Many idioms in English are so familiar to native speakers that we don’t stop to think about how strange they are. Why do we say “fly off the handle” to describe someone getting angry? How exactly is taking the spotlight “stealing someone’s thunder”? And what’s up with “close but no cigar”?

The Idioms of Our Lives

Idioms are often the hardest thing for new language-learners to get used to. They often trace back to culturally specific or historically unique experiences that outsiders — and sometimes even modern native speakers — would never have access to. Here’s the explanation behind 10 of the most popular English idioms (and if that’s not enough, here are 10 more).

1. Fly off the Handle

This comes from the days before mass manufacturing. Poorly built ax heads would occasionally soar off of their handles, leading to dangerous and unpredictable results.

This idiom comes from the early 1700s when an English playwright named John Dennis used a device to imitate the sound of thunder for one of his plays. The play was a flop, but other playwrights started using the device for their own plays to greater success — much to Dennis’s chagrin.

3. Close But No Cigar

This popular idiom comes from 19th-century carnival games, which originally handed out cigars to winners. Obviously, carnivals used to be far more adult-oriented than they are today.

This one’s not pretty: It comes from battlefield medics who, often short on anesthesia, would ask their patient to bite down on a bullet to distract themselves from the pain.

Feeling a little under the weather? While modern speakers use this to refer to any kind of illness, the sailors from whence it came meant it for seasickness. The original phrase was “under the weather bow,” referring to the side of the ship that took the brunt of bad weather. When storms made for choppy water, sailors would head below deck to brace themselves and try to stave off seasickness.

English speakers use this to mean sitting in the passenger seat of a car. The phrase dates back to the early 1900s in the Wild West when the person sitting beside the driver in a coach would often carry a shotgun for protection.

7. Barking Up the Wrong Tree

If you guessed that this came from “Alice in Wonderland,” you’ll have to look further back in history than that. Hatmakers in the 17th century commonly used mercury to cure the felt. Mercury is obviously toxic, and its health effects showed up in these tradesmen in the form of behavioral quirks that made them appear “mad,” or crazy.

9. Jump on the Bandwagon

The origin of this one is weirdly specific: It dates back to the 1848 U.S. Presidential election when a famed circus owner supported the campaign of Whig Party candidate Zachary Taylor by inviting him on his bandwagon — a horse-drawn carriage carrying a live orchestra — during a parade to advertise his message and meet potential voters. Other members of Taylor’s party realized what a good idea this was and clamored to join him on the bandwagon during future parades.

10. Keeping Up With the Joneses

This idiom about competing with your peers via material goods also has its origin in a specific person: wealthy 1850s socialite Elizabeth Schermerhorn Jones. She commissioned a grand 24-room mansion said to be fancy enough to prompt a building boom where her wealthy neighbors built their own mansions to compete with her.

Some Idioms Are Older Than Dirt

The English language, in the non-medieval form we know it today, is a very young language. Yet it contains a large number of idioms borrowed from other cultures, including ancient ones. One of the oldest idioms in English comes from Hammurabi’s Code of Laws, dating to around 1750 B.C.: “An eye for an eye, a tooth for a tooth.” While that sounds like a harsh decree, its meaning in context refers more to avoiding unreasonable punishment — you can’t punish someone for taking an eye by taking more than their eye, for example.

Similarly, a large number of Hebrew idioms originating in the Old Testament have made their way through the ages, such as describing fertile land (or just about any good thing) as “flowing with milk and honey.” Generally speaking, the longer two cultures have had contact with one another, the more likely they are to share idioms.

Every Language Has Its Own

English isn’t the only language that has its share of strange and colorful idioms. It’s the same in other languages, too. In German, to say you’re not seeing what everyone else can see, you’d say “Tomaten auf den Augen haben,” or literally “you have tomatoes on your eyes.” In French, the phrase “se regarder en chiens de faïence” literally translates as “to look at each other like earthenware dogs” — essentially, to look at each other with distrust. The Croatian version of “what goes around comes around” is “doće maca na vratanca,” or “the pussy cat will come to the tiny door,” and the Polish version of “were you born yesterday?” is “z choinki się urwałaś?” or “did you fall from a Christmas tree?” Tamil, a language spoken in some of India and Sri Lanka, has several water-themed idioms, including “to pour water over someone’s head,” or break off a relationship, and “show water to someone,” or be someone’s nemesis.

We handpick interesting, engaging and informative articles that you will enjoy!

Previous ArticleRecalling a Word on the Tip of Your Tongue Helps Ensure You’ll Forget It Next Time
Next ArticleThe American Accent Is Older Than the British Accent?

2 Replies to “Where Did These 10 Weird Idioms Come From?”